Having handled numerous high-profile personal injury and wrongful death cases throughout his career with notable results, Mr. Fraenkel’s litigation experience has spanned the World, including Africa, Asia, Canada, Central America, Europe, Mexico, the Middle East, South America and just about all 50 states of the U.S. He is well versed in State and Federal Tort claims procedures and requirements in addition to being an authority in national and international conflicts and choice of law issues. He has reached the height of professional excellence and is recognized for the highest levels of skill and integrity as a “preeminent-rated” attorney through the prestigious Martindale-Hubbell ® Peer Review Ratings™.

Mr. Fraenkel has litigated numerous international and domestic airline, commuter, military and general aviation crash cases. He was a member of the Plaintiffs’ Steering Committee on the China Airlines, Singapore Airlines and Korean Airlines cases. Mr. Fraenkel was one of the lead attorneys in the landmark Silk Air matter.

Some of the commercial airline matters he has been involved with include: 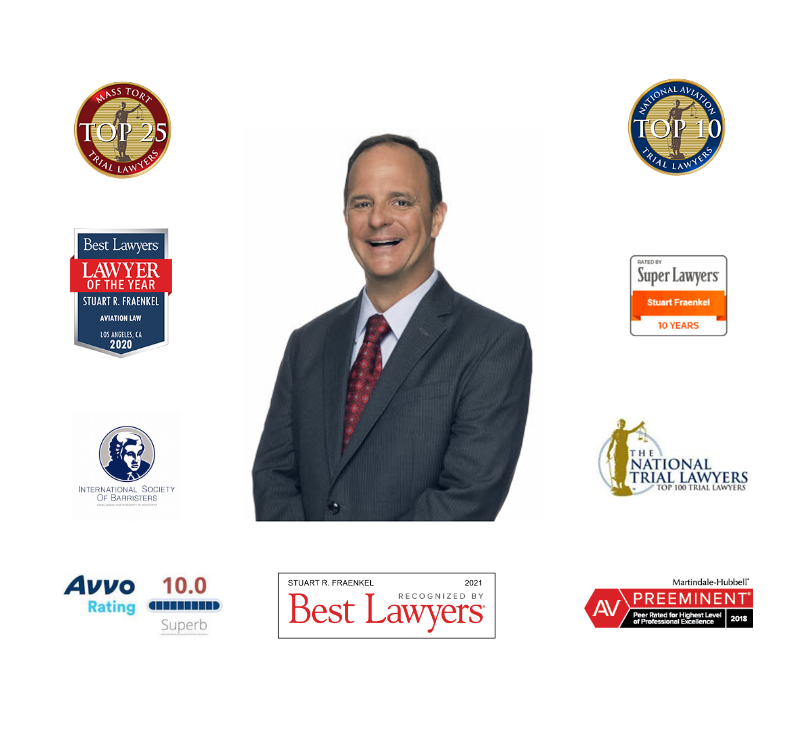 Some of the more high-profile general aviation matters Mr. Fraenkel worked on were the:

Mr. Fraenkel is also often called upon to participate as an aviation and legal source by numerous media, radio and television companies worldwide and has been quoted in various publications on numerous occasions. An article featuring Mr. Fraenkel was written for the Cessna Pilot’s Association magazine and another for an ABA TIPS publication. Mr. Fraenkel was also featured as an aviation law expert on a special NBC segment on Hawaiian Air Tour Safety.

Mr. Fraenkel is a United States Marine Corps veteran. He served as a CH-46 Sea Knight crew chief and A-4 Skyhawk plane captain, receiving numerous commendations during his tour. He also has extensive experience in aviation and vehicle maintenance—including combustion, diesel and turbine engines, electrical systems, hydraulics, structures, avionics systems, ejection systems and airframes. It is this extensive avionic background that has helped Mr. Fraenkel successfully litigate numerous international and domestic airline, commuter, military and general aviation crash cases during a career that has spanned more than two decades.

Mr. Fraenkel has also litigated numerous first party bad faith actions in cases arising out of the failure of insurance companies to defend and/or indemnify its insured, low-balling, fire loss, etc. Specifically, he was part of the team that received the landmark settlement against State Farm arising out of the Northridge Earthquake.

Mr. Fraenkel was also part of the team that litigated the famous, landmark case against PG&E which ultimately was made into the academy award winning movie, “Erin Brokovich.”

Topics upon which Mr. Fraenkel has spoken and lectured include: